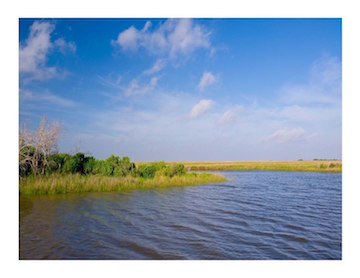 Artificial oyster reefs such as these have been planted to protect Louisiana's receding marsh lands. Photo Credit: Public Domain

Several groups in Louisiana are building pre-fab apartment complexes for oysters. There are lots of vacancies, and the rent is free. Well, almost free. In exchange for living space, the oysters protect the coastal wetlands from erosion, rising sea level, and other hazards.

Louisiana’s marshes have been disappearing in a hurry -- about 2,000 square miles have vanished since the 1930s. And another thousand square miles could disappear by 2050. The loss is powered by coastal erosion, a rising sea level, and dams and levees on the Mississippi River, which prevent fresh sediments from being deposited in the wetlands.

Today, though, groups are trying to reverse the loss by establishing artificial oyster reefs. They’ve set up several miles of them, at various locations.

The reefs block strong waves and currents, reducing the erosion of the coastline behind them. And as sea level rises, the reefs can grow taller, keeping the coastline safer.

Several techniques have been used to establish the reefs. Some have used broken oyster shells -- many of them donated by seafood restaurants. And a recent technique uses plastic mats filled with limestone.

Oysters then settle on these foundations. As they establish the reefs, they’ll fulfill their end of the bargain -- protecting coastal ecosystems from further harm.