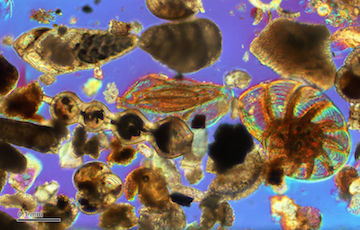 Life on Earth is a bit like a boxer who can take a few punches but still win the fight: It can be knocked around, but it’s hard to knock out.

Consider a punch delivered about 65 million years ago. A space rock the size of a city slammed into the Gulf of Mexico, off the Yucatan peninsula. Among other things, that blasted enough debris into the atmosphere to blot out the Sun around the entire planet. That killed off about three-quarters of all species of life -- including the dinosaurs. But life rebounded -- even at the site of the impact.

In 2016, scientists from the University of Texas and other institutions drilled deep into mountains around the center of the crater, which is known as Chicxulub. They probed layers of rock dating back to shortly after the impact.

They found the fossils of foraminifera -- microscopic organisms that make beautiful shells. They also found the burrows of worms, and the fossils of other organisms. From the layers of rock in which these clues appeared, the researchers deduced that life appeared on the crater floor just two or three years after the impact. And there was a thriving ecosystem within the crater about 30,000 years later -- much quicker than expected.

The researchers also found that rocks beneath the crater floor remained hot long after the impact. That could have allowed warm, mineral-rich water to bubble up to the bottom of the crater -- providing some of the nutrients needed to allow life to rebound after a jaw-breaking cosmic punch.