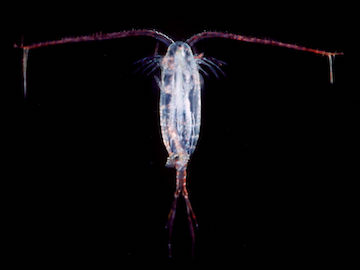 From November through April, a tiny marine creature is pretty common in the coastal waters of the northern Gulf of Mexico. It’s a species of copepod. It looks like a cross between a flea and a shrimp, but it’s only about a millimeter long.

After April, though, the species disappears -- there are no adults to be found. But by then the females have produced a bounty of eggs. The eggs settle to the ocean floor, where they shut down for the summer. When the water turns cooler and more oxygen-rich in late fall, the eggs resume their normal development. They then hatch and the copepod returns to the Gulf.

That stage in the eggs’ development is known as diapause. It’s common in many species of copepod, which are found all over the world. Copepods are at the bottom of the marine food chain, so they’re an important food source for many other types of ocean life.

The copepods produce two types of eggs. One type usually hatches quickly, although it can survive in the sediments for a few days or weeks. But diapause eggs don’t hatch for a long time. They generally have thicker walls and more layers. That allows them to survive bigger changes in temperature and salinity, physical stress -- and even passing through a predator’s digestive system. The diapause eggs go through a brief normal development phase, then they shut down.

This phase allows the copepods to survive poor conditions. And it may serve as a “backup” against years when the copepods produce few new eggs -- keeping the species alive and kicking.