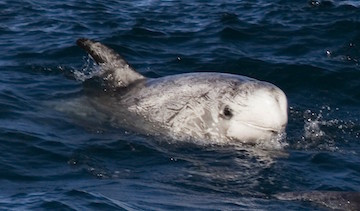 Risso's dolphins are some of the most scarred of any ocean creatures. Photo Credit: Michael L. Baird

For more than two decades around the start of the 20th century, Pelorus Jack was a constant companion to ships traveling through a dangerous passage on the coast of New Zealand. Some said the Risso’s dolphin actually guided the vessels to safety. And when a sailor supposedly tried to shoot Pelorus Jack, the government passed a law protecting him.

As the years passed, Pelorus Jack changed colors. His head and body morphed from grey to white -- the result of more and more scarring. In fact, Risso’s dolphins are among the most scarred of any ocean creature. They’re marked by lines, circles, and blotches. As the creatures age, those markings make them look like abstract charcoal sketches -- canvases recording countless encounters.

Risso’s dolphins are found around the world. Pelorus Jack aside, they typically stay away from shore. Males can grow up to about 13 feet long and weigh half a ton. They have tubby bodies and a long groove along the top of their heads. The animals usually congregate in small groups, although they sometimes are seen in groups of thousands.

One source of the scars probably is rows of small, sharp teeth on their bottom jaws. The animals may fight for mates, scraping parallel lines in the bodies of their opponents.

Other scars may come from their main food supply, squid. The dolphins feed mainly at night, when the squid come up near the surface. Some of the squid are pretty big, so they could put up a fight -- leaving more marks to their scarred-up opponents.