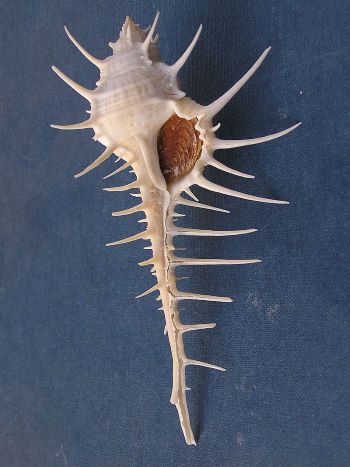 Life in the royal classes has its perks. In some ancient cultures, that even included their own color: purple. The upper crust of the Mediterranean often wore garments dyed purple or a closely related shade of blue with pigments that were worth more than gold. Anyone not of the right class who was caught wearing the colors could be severely punished—even executed.

One dye was a blue similar to that in modern blue jeans. Another was Tyrian purple, named for the city in ancient Phoenicia where much of it was made. The dyes were produced as early as 4,000 years ago. They were popular among the rich and famous in Phoenicia, Greece, Rome, and elsewhere. The purple, in fact, became a symbol of royalty.

The dyes were made from some related species of sea snails, known as Murex. The snails are up to a few inches long, with spiky shells that are cone shaped.

The snails produce a mucus that knocks out prey and wards off predators. And that’s where the dyes came from. But it took a huge number of snails to make even a small amount of dye. That made the dye expensive. So, the dye was reserved for royalty and the richest of the rich.

No one is sure just how the dyes were produced. But the steps included leaving thousands of snails to dry in the Sun, then boiling them and removing the glands that produce the mucus—a smelly process. But it created rich and beautiful colors for the rich and beautiful classes of the ancient Mediterranean.