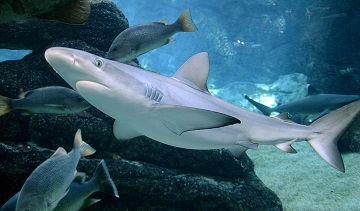 When you’re being chased by a great hammerhead shark, simply running away isn’t always a great option. The shark is big and fast, so there’s a good chance it’ll catch whatever it chases. So the best plan is to run to someplace where the sharks can’t follow -- like shallow water.

Adult blacktip sharks on the southeast coast of Florida seem to have adopted that strategy. Researchers saw them do it in three videos shot with drones in 2018 and ’19.

Blacktip sharks are a common sight along the Florida coast during the winter. They sometimes congregate by the thousands. Adults are about six feet long. They’re torpedo-shaped, so they’re good swimmers.

But they’re no match for the great hammerhead. Those photographed in Florida were at least twice as long as the blacktips. The hammerheads have tall, curved fins on their backs. When they roll over on their sides, the fin provides lift, like the wing of an airplane. And their tail fins provide a strong “push,” so they swim fast.

In the videos, though, the hammerheads didn’t catch any blacktips, no matter how fast they swam. The smaller sharks darted toward shore. The fins of the hammerheads breached the surface, so the sharks lost speed and thrashed around a bit before heading back toward deeper water -- and another try.

Researchers already knew that juvenile sharks use shallow waters to escape predators. But this was the first time that adults were seen to adopt the strategy -- running to someplace where bigger sharks couldn’t follow.