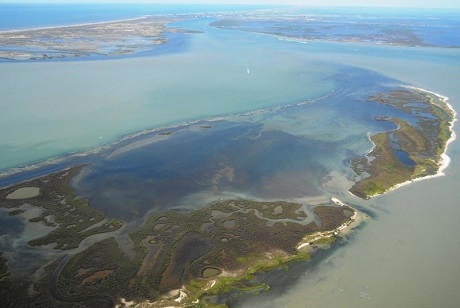 When a hurricane heads ashore, everything in its path is in danger. But not everything suffers the same fate. One house may be blown away, while the one next door suffers little damage. And the same thing happens off shore. Some seagrass beds may be wiped out, for example, while others are left pretty much unscathed.

Researchers at the University of Texas Marine Science Institute studied what happened to seagrass beds when Hurricane Harvey roared ashore in Texas, in 2017.

Seagrasses with wide blades and deep roots, such as turtlegrass, are thought to be more resistant to storm damage. But the researchers found that the storm obliterated about a third of the beds of turtlegrass, a large, slow-growing species. Beds of shoalgrass -- a smaller, faster-growing species -- weren’t damaged nearly as badly.

The researchers compared what happened with Harvey to observations of beds after other hurricanes in the Gulf of Mexico and Caribbean Sea. And they found that Harvey was the only storm to inflict major damage on beds of turtlegrass.

It turns out that blades of turtlegrass in Texas are about half as wide as their cousins elsewhere in the Gulf and the Caribbean. So the difference in survival of seagrasses in different regions may be the result of the structure of the plants themselves.

The researchers are trying to understand why turtlegrass in Texas has narrower blades. Such information is important as scientists continue to learn about how hurricanes affect life along the coast.