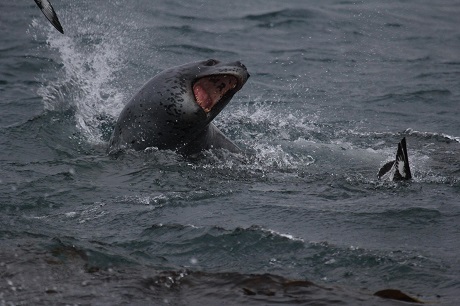 A leopard seal hunting in the Antarctic. Credit: James Robbins

Leopard seals are dangerous loners. They can be 10 feet long and weigh half a ton, and they sometimes attack people -- they’ve killed at least one.

Yet they’ve also been known to offer penguins to divers. Some have seen the gesture as a friendly gift, or perhaps as an act of pity for a poor hunter. But British researchers recently came up with another possible explanation: The seal might be trying to get the diver to share a meal -- an act that would make it easier for the seal to consume its dinner.

The scientists examined video of three dozen leopard seals at South Georgia Island, in the far-southern Atlantic Ocean. The seals were feeding on king penguins. Hunting in such a large group had never been seen before -- leopard seals usually hunt alone.

Even more unusual, a few of the seals were sharing their dinner. Two seals would each be tearing at the penguin as they swam side by side.

The researchers said that such behavior could be a case of “go along to get along.” With so much food around, it would take less energy to share a penguin than to fight for it -- a fight that might leave one of the seals with nothing.

On the other hand, the behavior could also be a form of deliberate cooperation. It would take less energy for two seals to work together to pull apart their prey than for one seal to thrash around until the penguin could be eaten.

If that’s the case, then when a leopard seal offers a penguin to a diver, it’s not an outright gift -- it’s an invitation to share a meal.