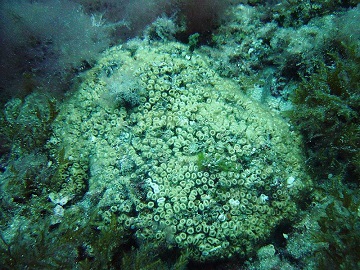 Certain corals have adaptations that may help them survive in a changing climate. Credit: Esculapio, Wikipedia

Warmer oceans are bad news for corals. Higher temperatures can kill the living part of a coral, leaving only a bleached-out skeleton. Despite appearances, though, one species of coral might not be dead at all -- it might be only mostly dead. And when conditions improve, it can regenerate.

Researchers studied a type of coral found only in the Mediterranean Sea. In particular, they regularly checked on a large patch of coral off the coast of Spain from 2002 through 2017.

At various times during that period, some of the individual coral colonies looked dead. They lost their color, and some were overgrown with algae. And some of them really were dead -- but not all.

The scientists found that some of the living organisms of the coral colonies, known as polyps, had gone into a sort of hibernation. The change was triggered by warmer waters during the summer months. The polyps got smaller, and they pulled away from the hard skeleton. In time, though, as the temperature dropped, some of the polyps rejuvenated. They returned to normal, bringing their colonies back to life.

Scientists had seen evidence of this type of behavior in ancient coral fossils. But it’s the first time that modern corals were seen to come back to life.

That could be a way for corals to survive our changing climate. But the researchers warn that regeneration might not last for long. Continued rises in global temperatures could be too much for the coral to handle -- turning them from mostly dead to all dead.