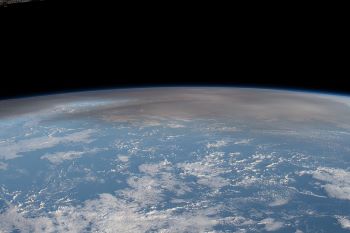 The eruption at Hunga Tonga - Hunga Ha'apai in 2022 was one of the largest ever recorded and sent emissions high into the atmosphere. Credit: Kayla Barron, NASA.

What a volcano gives, it can also take away. Consider the tiny Pacific islands of Hunga Tonga and Hunga Ha’apai. They were built by an underwater volcano named for the islands. An eruption in 2015 built new land that connected them.

But a spectacular eruption in 2022 blasted away not only the new land, but much of the two islands. It may have been the most powerful eruption since the island of Krakatoa was blasted to bits in 1883. And its effects were felt around the entire planet.

The volcano is in the nation of Tonga—a chain of islands about a third of the way from New Zealand to Hawaii. It blew a cloud of ash high into the sky in December of 2021. It erupted more violently a month later. This time, the ash cloud reached altitudes of 30 miles—higher than any other eruption yet seen. It produced 200,000 lightning blasts. And it was heard as far as Alaska—more than 6,000 miles away.

The new outburst also created high-speed tsunamis. They devastated parts of Tonga, and reached Japan and the Americas. The tsunamis might have been sped up by pressure waves in the air.

There were several kinds of waves in the atmosphere. Some circled the planet up to six times. They even climbed scores of miles high, where they created high-speed winds and odd electric currents.

Hunga Tonga-Hunga Ha’apai produces modest eruptions every few decades, and big ones once a millennium or so. So, we haven’t heard the last of this underwater monster.