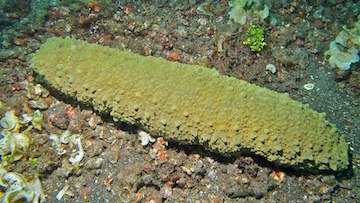 An image of a sea cucumber, given its name for its resemblance to the vegetable. Photo Credit: Bernard Dupont/ Creative Commons Attribution-Share Alike 2.0 Generic

Like its garden-variety namesake, the sea cucumber doesn’t get around much. Most species appear to spend their entire adult lives on the same patch of sea floor. But recent research suggests that at least some of them may get out more. They’ve been seen to drift along like tumbleweeds.

Sea cucumbers are named for their resemblance to the vegetable. They have long, tube-shaped bodies with a mouth at one end. Tentacles around the mouth allow them to scoop up mud and sand, which they filter for food.

Sea cucumbers have short “tube feet” that allow them to move, but not very fast. In most cases, their top speed is a few feet per day.

Researchers recently used underwater cameras to watch wild sea cucumbers in a couple of locations off the coast of Canada. They also studied farmed cucumbers off Madagascar. And they got some surprises.

In both Canadian locations, large groups of cucumbers hurtled along with the currents. One group, in fact, topped out at about two miles per hour -- fast enough to cover about 50 miles in a day. The critters moved by sucking in lots of water, making their bodies look more like puffed-up balloons than cucumbers. That made them more buoyant. Then they let go of the ground and moved with the current.

Experiments in the lab showed that the animals were more likely to move when conditions were too crowded, or the water was too cloudy or not salty enough. The poor conditions encouraged the creatures to move on -- drifting like tumbling tumbleweeds.