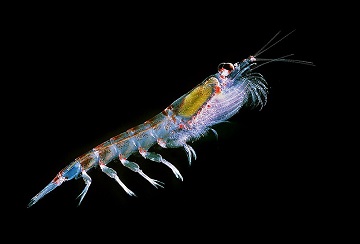 Baleen whales use a comb-like structure known as baleen to filter krill and other small organisms from the water. Credit: Uwe Kils, CC BY-SA 3.0

Nature doesn’t always work in ways that seem to make sense -- at least at first glance. You might expect, for example, that as giant whales disappeared from the Southern Ocean during the 20th century, their prey -- tiny organisms known as krill -- would flourish. But that didn’t happen. Instead, the krill began disappearing as well.

Baleen whales use a comb-like structure known as baleen to filter krill and other small organisms from the water. And each whale can gulp tons of food every day. A recent study, in fact, found that the average whale consumes three times as much food as previously estimated.

Based on that number, the study calculated that baleen whales consumed about 200 million tons of krill from the Southern Ocean in 1900 alone. But industrial-scale whaling killed most of the giants -- especially blue whales. So in 2000, the whales took only one million tons of krill.

Despite the disappearance of the big predators, though, the number of krill in the Southern Ocean is only a fraction of what it once was. In fact, the total amount of krill in the ocean today is less than the giant predators ate every year before big-time whaling.

One possible reason for the decline: a lack of whales. Researchers noted that big whales recycle a lot of nutrients into the ocean. The amount of recycled iron alone has dropped by 99.9 percent -- making the Southern Ocean a lot less productive for both krill and the giant whales they sustain.