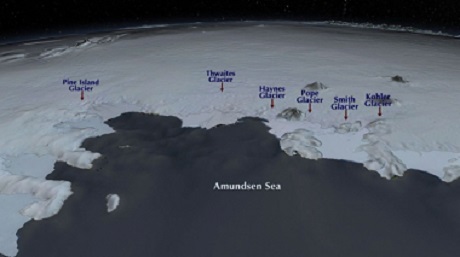 The Amundsen Sea region is only a fraction of the whole West Antarctic Ice Sheet. Credit: NASA

The effects of our changing climate extend from main street to the ends of the Earth. Warmer air and oceans are melting the ice cap at the north pole, for example. And a recent study says the same thing is happening in the Antarctic.

In recent decades, the West Antarctic Ice Sheet has been melting at an increasing pace. It contains about six million cubic miles of ice. But glaciers on its edge are getting smaller. Scientists have suspected that global climate change is playing a role. But natural changes in the Pacific Ocean also change the rate at which the glaciers melt.

A recent study tried to separate the natural variations from those caused by humans. Researchers looked at Antarctic ice records compiled by satellites over the last 40 years. They also looked at records of changes in the Pacific Ocean going back a century. Those changes have a direct influence on conditions in the Antarctic. The researchers then used climate models to simulate what’s going on.

They found that warmer air is changing the winds across West Antarctica. Instead of blowing mainly from the east, the easterly and westerly winds balance out. That’s allowing warmer waters to flow past the West Antarctic Ice Sheet. The warmer water melts some of the ice.

On average, the glaciers are losing enough ice to increase global sea level by a couple of inches over the next century. As the air gets even warmer, though, that rate should increase – adding more water to the oceans at the bottom of the world.