Sight, hearing, smell, taste, and touch — the five senses that serve humans well. But still we dream of a sixth sense that might allow us to predict the future, read minds, or even see the dead. 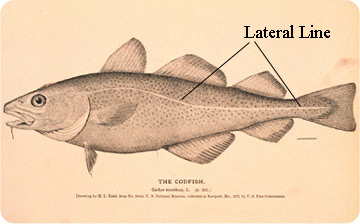 Fishes are not limited to just these five senses. Among their “extra” senses is the ability to detect very small water movements.

The organs they use to detect such water movements are part of the “lateralis” system, a term that refers to the prominent lateral line, a major component of this sensory system. Most fishes have one or more fine lines on the side of the body that are actually a continuous canal through the scales from behind the head to the base of the tail. There are similar canals on a fish’s head. Inside the canals are neuromasts, each with a tiny cluster of hairs that bend when water moves past it, which in turn triggers the nervous system.

Using its lateralis system, a fish can “feel” the speed of the water, so that it can maintain a constant swimming speed in a school or hold position against the flow of a river. At night or in very cloudy water, a fish can sense the patterns of water flow around plants and rocks to form an image of its environment. It can also detect the swimming movements of its prey in the water column or the thrashing of an insect on the surface of a lake.
Realizing all the advantages of this sixth sense, it seems that our having only five senses makes no sense at all.