A Sense of Power

The next time you have a chance, take a close look — a really close look — at a shark’s head.  Under the snout and around the mouth you will notice hundreds of tiny pores.  These are the openings of jelly-filled sacs known as ampullae of Lorenzini, and they give the shark the ability to sense electricity. 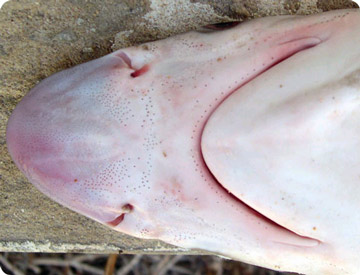 Just where is the “juice” under water? It turns out that the muscles of all animals generate tiny electrical currents every time they contract. So, when a flounder is resting on the bottom, camouflaged by its ability to match the color and pattern of the sand around it, the electricity produced by its breathing and its heartbeat could give it away.

But does a shark actually use this special sense to find prey, or does it use its other senses? Scientists found that when they covered a buried flounder with an electrically conductive plate, so that the shark could not see or smell the fish, the shark was able to find the fish. But if the plate was insulated, so that electricity could not escape, the shark could not find the fish. The final piece of proof came when the shark attacked buried electrodes that were emitting a tiny electrical current.