The Power of Waves

Ocean waves are a powerful force — and a potential source of renewable energy. Engineers have been working on devices to harness wave power for years, and in 2007, the world’s first wave farm was launched off the coast of Portugal. 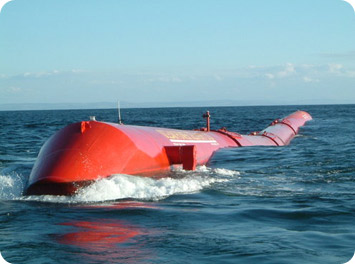 Portugal’s wave farm uses an energy-catching device called the Pelamis. Designed by Scottish engineers, the Pelamis is named after a sea snake and looks the part — it’s a long, cylindrical steel tube divided into four sections connected by hinged joints. The tube floats in the water facing the waves and is held in place with weights and buoys.

Oncoming ocean waves rock the snake-like Pelamis, causing a buildup of pressure that turns a series of hydraulic motors inside the device. These motors drive electrical generators which produce electricity.

In a wave farm, each device’s generators are connected to a single cable, which feeds power to an electricity grid onshore. Portugal’s wave farm will eventually include 30 Pelamis devices and is expected to generate enough electricity to power 15,000 homes.

Research is continuing to make wave converters like the Pelamis as efficient as possible. As other energy resources become scarce, researchers are increasingly looking to the tremendous power of the sea.