By Mandy Calkins
If you ever lose your wedding ring on a wet beach, you might want to call on a red knot to help find it. 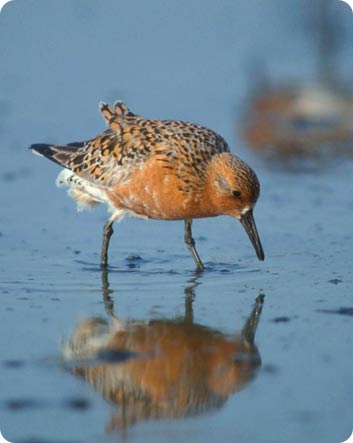 Red knots are a species of sandpiper found in coastal areas throughout the world. Watch them pop their beaks in and out of the wet sand in search of clams, snails and crustaceans to feed on, and they might appear to be poking around randomly. But scientists believe the red knot uses a more precise method.

Researchers tested captive red knots to see if they could tell the difference between a bucket containing stones buried in wet sand from one that contained wet sand but no stones. The stones were similar in size to a type of clam the red knots eat, but they did not move, had no smell, and were buried beyond the reach of the birds’ bills. Yet somehow, the red knots were able to tell which buckets contained stones and which didn’t.

How did the birds detect the stones? A closer look at the red knot’s bill reveals the answer: sensory structures called Herbst’s corpuscles, which sense changes in pressure. When the birds move their bills in and out of wet sand in the same spot, they build up pressure in the sea water surrounding the sand particles. If there is a hard object nearby - such as a tasty clam - the sensors in the red knot’s bill detect a disturbance in this pressure, giving away the object’s presence. This sensory capability makes the red knot an expert forager - and leaves its prey with nowhere to hide.