Zombie Microbes from the Deep 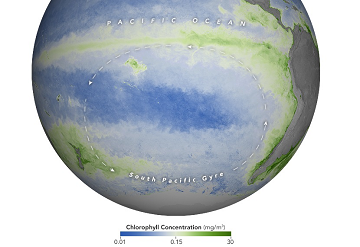 Scientists have known for years that microorganisms exist throughout the ancient layers of sediment hundreds of feet below the ocean’s floor. But it wasn’t clear whether those microbes are dead, alive or dormant. Despite being millions of years old, it turns out they are not dead. They are just hungry.

A decade ago, a team of Japanese scientists drilled more than 300 feet into the sediment at a spot almost four miles below the ocean’s surface to collect samples. That spot was in the middle of the South Pacific Gyre, a system of ocean currents whose center is the furthest point in the ocean from any continent and therefore the most barren in nutrients. From this oceanic desert, the scientists collected nearly 7,000 singlecelled organisms. Some were aerobic microbes, which require oxygen to live, while others—anaerobic microbes—can live without oxygen. Most were bacteria, with a small percentage of other types of singlecelled creatures. They had resided in the organic sediment for 100 million years…since dinosaurs roamed Earth.

In a recent experiment, the scientists fed the microbes different food mixtures, including sugars, amino acids, ammonia, acetate or other chemicals. The anaerobic microorganisms did not respond, but nearly all the aerobic ones began to grow and multiply. The stunned scientists realized these microorganisms weren’t dead, fossilized microbes. They simply needed nutrients to “wake up” their metabolism. The discovery now raises many more questions: What kind of state were the microbes in all that time? What can scientists learn about their evolution? And how did they survive all those years without food?