Hurricane experts are predicting a busy season this year. And that could mean bigger-than-usual “red tides” later on.

A red tide is a “bloom” of algae in coastal waters. Some blooms are harmless. But some contain a species of algae that produces toxins that can kill fish and birds and harm people. 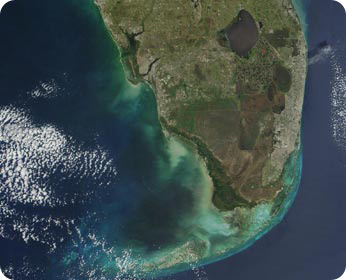 That was the case along the Gulf Coast of Florida in 2005 -- and scientists say that a busy hurricane season may have been partly to blame. They based those findings in part on observations by satellites. Among other things, the orbiting outposts detected a change in the water’s color caused by the algae.

Satellites are important tools for monitoring the oceans. They can view the entire planet every day, so they can map ocean temperatures and currents and other conditions across the globe.

They’re also useful for watching life. For example, they can track colorful blooms of plankton -- the microscopic organisms that form the first link in the food chain. They can also alert scientists to possible harm to coral reefs that can be caused by unusually warm waters.

Satellites mapped the entire Florida red tide outbreak. Their observations suggested that an active hurricane season might have made the outbreak much worse than normal. Heavy rainfall boosted the flow of nutrient-rich waters from the land and from underground water sources into coastal waters. That helped the red tide spread across more than 26,000 square miles, and last for a year.