In 1873, a character in a Jules Verne novel bet that he could go around the world in 80 days. Less than a century later, an American submarine did it in 61 -- entirely underwater.

The U.S.S. Triton was the largest submarine yet built -- half again the length of a football field, and powered by two nuclear reactors. 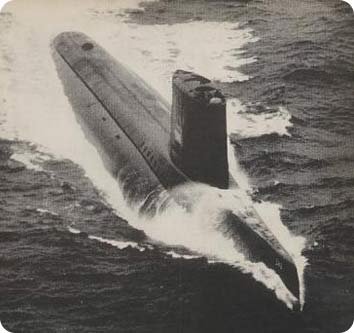 In 1960, Triton was the largest submarine built. Credit: wikipedia

The cruise would demonstrate American military power. But it would also serve a scientific purpose. Triton would map the ocean floor, measure water temperature and salinity, and deploy small buoys to trace the currents.

Triton left her Connecticut home on February 16th, 1960. She began her round-the-world run when she passed a group of small islands in the Atlantic on February 24th. Triton crossed the Atlantic, Pacific, and Indian oceans, sailing far enough north to pass Hawaii. She returned to the Atlantic islands on April 25th -- more than 30,000 miles after she first passed them.

During the voyage, the boat had to poke its “sail” above the waves just once -- to allow a sick crewman to be taken off. But the hull remained below the surface. That allowed Triton to preserve its record of going around the world underwater -- in 60 days and 21 hours.