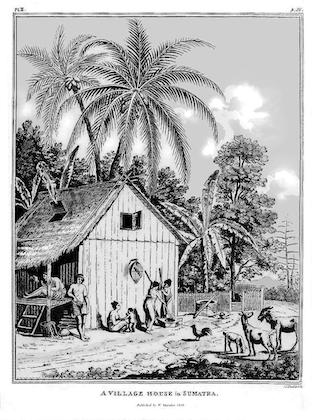 A rendition of the Sumatra Villages. Photo Credit: Public Domain

A massive tsunami in northwestern Sumatra wiped out coastal villages for miles. Only one survived. But by a century later, its influence began to wane -- the result of a new power settling on the sites of the destroyed villages.

Archaeologists began studying the area in detail after another tsunami, in 2004, killed more than 150,000 in Sumatra alone. And in 2006, one researcher discovered bits of pottery and Muslim gravestones that were uncovered by the 2004 tsunami. He recruited a large team to study a 25-mile stretch of coastline in a region known as Aceh.

The team discovered thousands of gravestones and tens of thousands of bits of pottery. They were concentrated in 10 villages. Nine of the villages were abandoned at the same time -- around 1394. That corresponds to the time of a major tsunami revealed by geological studies.

The tenth village survived because it was on higher ground. It remained a major trading site for more than a century after the tsunami. After that, though, it withered away. At the same time, new villages began appearing in the region decimated by the tsunami.

The new villages probably weren't settled by the locals. Instead, they were established by Muslim traders from other parts of southeast Asia. They built the Aceh Sultanate, which lasted for centuries before it disappeared as well.

The researchers say their work suggests that scientists should look to the archaeological record to help measure the risk of environmental disasters -- like tsunamis.