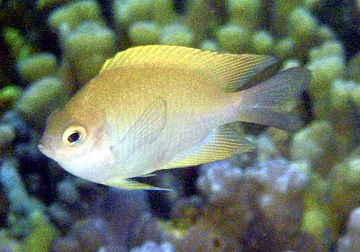 Most fish in the oceans don’t do anything to protect their offspring. They release their eggs, then move on. So most of the eggs get eaten, and most of the fish that hatch get eaten as well.

So the few species that do protect their young have an advantage. In fact, other fish sometimes try to profit from that protection by sneaking their own eggs into the nest. So their kiddos get free babysitting from the other parents.

Researchers recently studied this behavior in damselfish living on coral reefs in the Philippines. There are hundreds of species of damselfish, most of them small and colorful. Only a handful of species actually cares for its young, though. The parents chase away predators. They also allow the hatchlings to eat mucus from their skin, which helps them grow quickly without leaving the safety of the nest to feed.

The research team compared DNA samples from hundreds of fish, both adults and hatchlings, from 40 different “broods.” They found that the offspring didn’t always match the parents. Some of the interlopers were members of the same species as the parents that maintained the brood. But some were of completely different species of damselfish.

The research team suggested a couple of possible explanations. Some of the non-matching fish might have drifted over from other nests. But most of them probably hatched from eggs laid in the same nests by species that don’t protect their young. So those parents were getting some free babysitting for their newborns.