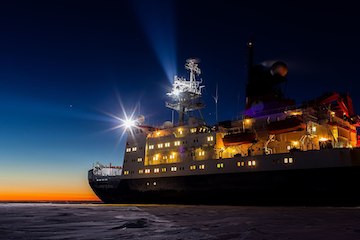 The Polarsten vessel is set to take a year long trip through the Arctic in order to study climate change. Photo Credit: Alfred Wegener Institute

Most of the time, an icebreaker that doesn’t plow through the ice is about as useful as a car without wheels. But a German icebreaker is scheduled to make an important scientific expedition -- while frozen inside the ice.

The Research Vessel Polarstern will study the Arctic for a year. The mission’s goal is to collect information that will help scientists develop better models of how the climate is changing.

The icebreaker will leave Norway in September, and head for icy waters north of Siberia. About 600 people will spend time on the ship. They’ll be shuttled in and out by other icebreakers.

Once Polarstern is frozen in place, scientists will set up remote stations on the ice up to 30 miles away. The entire network will drift close to the north pole during winter, then southward into the Atlantic Ocean. At the same time, aircraft will fly missions above the network to study the upper atmosphere.

Arctic waters have been warming at a faster rate than the rest of the planet. But climate models don’t do a good job of explaining why that’s the case. A poor understanding of this region makes it harder to develop models that explain the global climate.

Mission scientists will study the ice, the ocean, and the atmosphere. They’ll probe what happens when the ice freezes and when it melts. They’ll study the effects of the changing ice on the ocean and on marine life. And they’ll look at how changes in the Arctic may cause changes to other parts of the planet -- all while drifting with the ice.