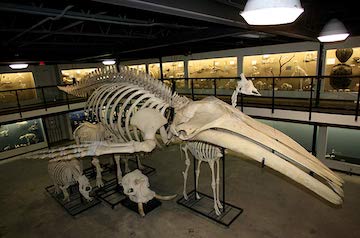 An image of the modern day skeleton of a Humpback whale. Photo Credit: Public Domain

An ancestor of modern-day whales may have paddled across the Atlantic Ocean like an otter. And when it reached the Americas, it could have walked out on its back legs.

Scientists discovered the fossilized skeleton of this odd creature in the desert of Peru, near the Pacific Ocean. It was in layers of sediment that were almost 43 million years old. That makes it the oldest creature of its kind found in the southern hemisphere or in the Pacific Ocean.

Researchers called the creature Peregocetus pacificus -- a name that means “the traveling whale that reached the Pacific.” The animal was about 13 feet long. And the skeleton indicates that it could both swim in the water and walk on land.

It had four legs, with the two at the back strong enough to support its weight on land. And parts of its backbone and other features suggest that it could swim like a beaver or an otter -- paddling with its strong back legs, and flapping its body and its long, wide tail from side to side.

The researchers say that the first Peregocetus pacificus crossed the south Atlantic from Africa to South America. The continents back then were less than half as far apart as they are now, so the swim would have been easier. And the creatures would have been helped by a west-bound current.

When they reached South America, they spread out. Some traveled over the top of South America, which wasn’t linked to North America. And some of those made it far down the coast -- traveling whales that reached the Pacific.