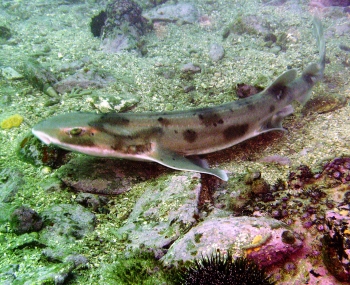 The draughtsboard shark, unlike other types of sharks, is able to sleep on the bottom of the sea floor. Credit: Py1jtp, CC BY-SA 3.0.

A shark’s eyes can be scary—even if the shark is asleep. A recent study found that one species of shark appears to keep its eyes open about a third of the time it’s asleep. That could make predators think twice about going after the shark.

Researchers studied the draughtsboard shark, which is found around New Zealand. It’s typically about three feet long, and has a wide, flat body and a big mouth. When it’s threatened, it can suck in water or air to make it look bigger and more dangerous. And it can make a sound like a barking dog.

Unlike most sharks, draughtsboards settle on the bottom, most often during the day. Researchers wanted to know if that meant the sharks actually slept during the day.

They brought seven sharks into the lab. They tested them for 24 hours. They monitored the sharks’ metabolism, and watched their body position and their eyes. And they found that any shark that stayed still for more than five minutes probably was asleep. Its metabolism slowed way down, and its posture changed, too—instead of supporting itself on its fins, it was lying flat on the bottom. Its eyes weren’t a good indicator, though—they were open a good bit of the time.

This is one of the first studies to show that any type of shark sleeps. Sleeping might be a problem for many other types of sharks because they have to keep moving to force oxygen-rich water over their gills. So, there’s a lot more work to be done to really understand the sleep habits of sharks.