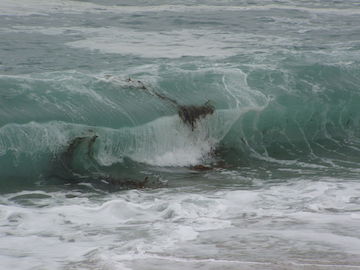 Sleeper waves have the potential to pull beachgoers back with them into the ocean. Photo Credit: Tewy/ Creative Commons Attribution-Share Alike 3.0 Unported

A calm day on the beaches of the Pacific Northwest can turn deadly in a hurry. A single large wave can rush ashore, running inland up to 50 yards farther than the previous waves. Anyone who’s too close can be washed into the ocean. In fact, more than two dozen beachgoers have been killed by such waves in the last decade and a half.

These potential killers are called sneaker waves or sleeper waves. And scientists are just starting to study them. A sneaker wave is one that’s much higher than any of the waves that came before it, and that appears without warning. Such waves are a bit like tsunamis, but at a much smaller scale. And unlike tsunamis, they aren’t caused by underwater earthquakes or similar events.

Researchers at Oregon State University, though, found suggestions that the waves may be caused by storms that are far away. The scientists began studying sneaker waves after a series of them washed ashore from California to Washington in January of 2016.

Over the last few years, the researchers have measured waves along the coast and at sea with buoys, tide gauges, and sensors on the ocean floor. They’ve found that the “sneakers” were produced by large swells that began at sea -- perhaps created by big storms thousands of miles away.

Yet there’s still no way to predict sneaker waves -- they can pop up on the calmest of days, surrounded by much lower waves. So experts suggest a simple rule when you’re exploring these or any other beaches: Never turn your back on the ocean.