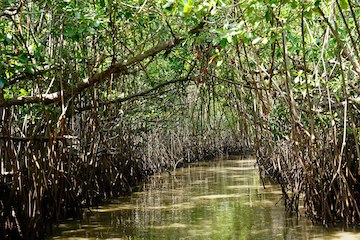 Although mangrove trees aren’t usually tall, in certain regions of Africa and the Americas they can grow to be giants. Photo Credit: Satdeep Gill/ Creative Commons Attribution-Share Alike 4.0 International

Mangrove forests are some of the most important on the planet. They protect the coastline from storms and provide habitat for fish and other creatures.

They also sponge up carbon dioxide from the atmosphere, which helps slow down changes to the climate. In fact, a recent study says that mangrove forests may be storing five and a half trillion tons of carbon. Most of that is in their tangled networks of roots, and in the surrounding soil, where fallen leaves and branches decay and deposit their carbon. But almost a third of the carbon is stored above ground, in the trees themselves.

Researchers used observations from space shuttle missions and other spacecraft to plot mangrove forests around the world. They then visited dozens of sites to confirm those observations.

The researchers plotted the heights of the mangrove trees. In most parts of the world, the trees aren’t that tall. But in equatorial regions of Africa and the Americas, the trees are giants. In Costa Rica, for example, they top out at more than 150 feet. In Colombia, they reach about 180 feet. And on the west coast of Africa, they climb to more than 200 feet -- the tallest mangroves in the world.

These regions are hot and wet, with more than 200 inches of rainfall per year. Big rivers empty into the ocean in these regions, lowering the salinity of the coastal marshes where mangroves live. And they’re remote, so there’s little or no human development -- no one to interfere with these important coastal forests.