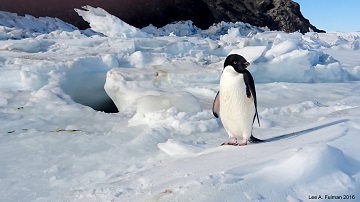 No one is sure how the changing climate will affect the Adelie penguin populations. Credit: Lee Fuiman

Adelie penguins live in one of the iciest regions on Earth -- on the rim of Antarctica. But when the ice around one colony thinned out a few years ago, the penguins flourished. The adults grew fatter and the chicks were more likely to survive.

Adelies are among the smallest penguins in Antarctica. A typical adult is up to a couple of feet tall and weighs about 10 to 12 pounds. They’re also the most common penguins on the continent -- they form colonies of thousands of birds all around it.

During four summers, researchers studied a colony on a bay in East Antarctica. They taped instruments to 175 penguins. The packages included video cameras, GPS trackers, and instruments for measuring the penguins’ motions.

Three of the summers stayed icy. But during the fourth, the bay was fairly ice free. Open water came up to the penguins’ nesting grounds. So instead of walking a long way across the ice until they found a crack, the birds could plunge straight into the water to hunt for food.

Penguins are much better swimmers than walkers, so they spent fewer hours moving -- a big energy savings. And they caught more krill -- tiny shrimp-like organisms that are the mainstay of their diet. So the average adult was about 10 percent heavier than during icier years. Chicks grew much faster, and a greater percentage of them survived.

No one is sure how the changing climate will affect the Adelie population over the long term. But for at least one group, a lack of ice turned one summer into a beach party.