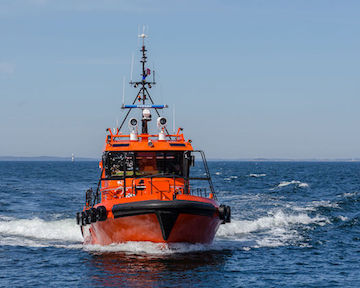 Scientists and engineers are trying to find a way to use solar and wind power to propel boats and ships. Photo Credit: Arild vågen/ Creative Commons Attribution-Share Alike 3.0 Unported

For many people, the rolling and pitching of an ocean-going boat means a quick trip to the medicine cabinet. But for a new type of automated boat, that same motion means free power. The wave action is used to push the boat forward. That could provide a new way for marine scientists to explore the oceans.

Scientists and engineers are experimenting with many ways to propel boats and ships with renewable energy. They’re trying solar and wind power, for example, and breaking apart seawater to power fuel cells.

AutoNaut is applying wave power. It uses a combination of systems to convert the wave energy to propulsion: a specially shaped hull up to about 23 feet long, plus curved structures on the bottom of the boat. That can generate top speeds of up to about five miles per hour.

The boats use solar cells to power scientific instruments. So far, AutoNaut has carried sonar, plus gear to measure weather, ocean currents, and the acidity of the water. And the craft use satellite communications to provide remote control, and to allow them to transmit their observations to mission scientists.

The system has been tried out on missions for NATO, the Royal Navy, and scientific agencies in the U.K. And it was developed with assistance from a business arm of the European Space Agency.

Developers say the AutoNaut can stay at sea for weeks at a time, and cover thousands of miles. That could allow scientists to explore the oceans for a fraction of the cost of current vessels -- without the need for Dramamine.